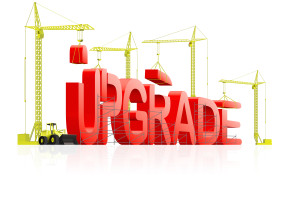 It took a bit of time, but a  fairly improved version of ConnectStats is now ready. It contains the features of the failed version 2.5, and a few other significant improvements. In a nutshell, you can now access your daily steps and activity as recorded by your apple watch or iPhone motion processor (this is not available on iPad). There are quite a few under the hood improvement for future extensibility, which always brings the risk of some new bugs… And finally improvement for the ski season with extra fields and plots for your ski activities, along with display of new run dynamics fields and graphs. It contains also a few minor improvements, like multi sport display and filter for the calendar and swipe right to move backwards on graphs in activities.

There were quite a bit of internal refactoring that made it easier to add new graphs in ConnectStats. If your device supports it, you will now have graphs for temperature, along with the new running dynamics of the fenix 3. It also now is easier to had new derived plots like for example the vertical speed, which I initially build for ski activities, but can be handy, I suppose, for cycling or running as well. I say “I suppose”, because I live in London, and vertical speed in a flat city is only marginally helpful… If there are graphs your device supports that you would like to see in ConnectStats contact me and send me a fit file so I can test it and add it.

This is only applicable to iPhone users. The idea is to integrate the data recorded in the health app into ConnectStats to enable some of the analysis available to the run or cycle data.

To enable it, in the service page, turn on Health Data. It will try to figure out the source automatically: either the apple watch or your phone if it has a motion processor. If it does not select the right source you can select it manually. 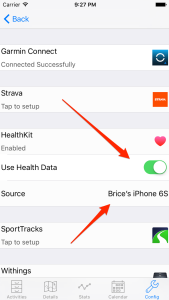 Once you enabled it, during refresh the latest data should get integrated into your activity list. Because ConnectStats primary focus is still to look at sport activities, there is a quick filter available to only show the sport activities and hide the day summary coming from the health data. 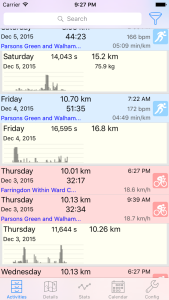 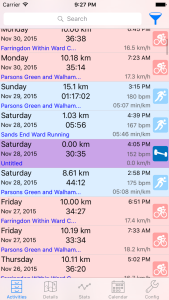 The primary purpose for me is to be able to have quick view of the day and look at the stats and data from the apple watch or the phone in a bit more details. In the stats session, you have now a new type Days to look at these stats

The summary page will show monthly steps progression: how well I am doing in step this month versus last and Short Term vs Long Term activity. 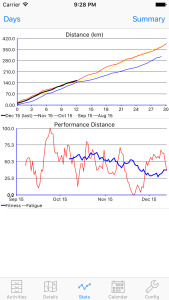 Here you see the weekly or monthly summary. 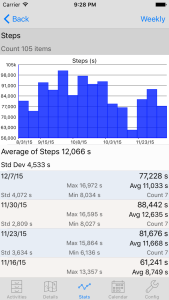 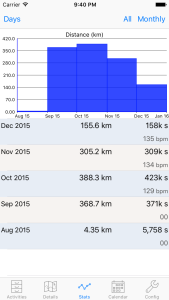 I will see how much I expand on the functionality. As I mentioned before I don’t anticipate it will become a major focus for the app.

One feature people repeatedly ask about is the ability to see statistics for a selection of Garmin Activities. It is actually possible by using the search feature.

Let’s say for example I want to see the statistics of all the running activities in july 2015. I first enter that as a search 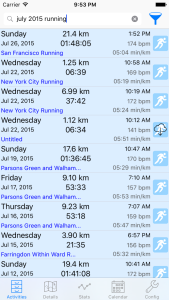 Then in the statistics page, hit the type button until the term Search appears. It will remind you what the search term was, and then the statistics you see are only using the currently selected list: 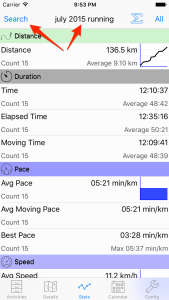 This will be the case for the other stats page as well, here for example I show a scatter plot of Pace versus HR for the running activities of July 2015 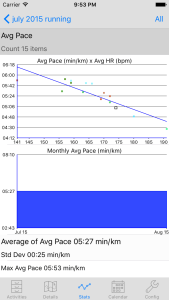 Another useful application is to run statistics on a specific activity type, for example all the skiing activities as here, I show how much elevation gain I achieved each month in backcountry skiing. You can see more about skiing here 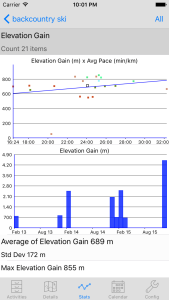 It is limited though by the current search syntax of ConnectStats, which if there is significant demand, I may extend. Just let me know.

I started noticing something quite weird with the activities recorded on the Fenix 3 since I updated to firmware 6.5 for my running activities. The pace reported on garmin connect is quite off, while the pace of the splits seems correct. At the very least the two are very inconsistent, the pace on the pace graph is typically quite slower than the correct pace. You can see an example activity here, all the lap pace overlay are clearly toward the minimum of the lap pace, which is not possible. 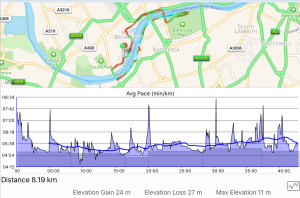 While if I look at a similar run but in december (pre 6.5) it’s much better

Looking at the activity on garmin connect, shows the same issue, so I don’t think it’s a bug in Connectstats (my initial thought). Old activities (pre 6.5) do not show the issue. On Garmin website, while it’s harder to see, if you move around the pace, you can see most values are quite slower than the average pace for the activity. 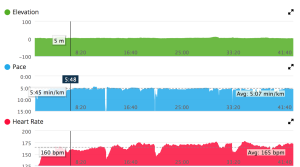 If I looked at the same activities on Activity on Strava,  the graph is consistent with the splits. Strava seem to recreate the pace from the GPS points (my guess). 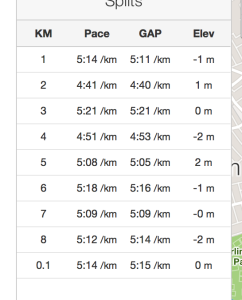 I then looked at the details in excel, here too, it’s quite clear that the speed recorded for each point is quite slower, while the speed of the split is correct. For example for the first split, I looked for the 1000m point, computed the time to start 308 seconds, which gives 3.24 meter/seconds or 5:08min/km. While a simple average of the speed recorded for each point gives 2.72mps or 6:07min/km. The simple average is inaccurate, it should be weighted by the time between points, but this is way off. 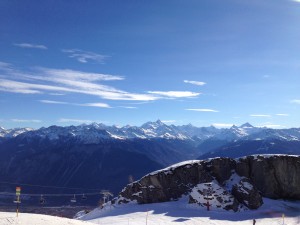 I have been in the Swiss mountains for almost two weeks around the year end holiday season and enjoyed quite a bit of skiing. There wasn’t much snow this year so resort skiing was limited, but I got to do a lot of the other activity I enjoy in the mountain: ski de randonnée or ski touring, even if given the snow condition you could only really go on the pistes with artificial snow.

This gave me opportunity to try the garmin fenix 3 ski features and think about what I would want to see in connectstats to look at these activities in more details.

The fenix allows to record ski activities by default. I went and selected resort skiing for downhill ski and xc ski for the uphill randonnée skiing.

For downhill skiing it worked great, and only recorded the time you went downhill as separate tracks. I had added the ability to connectstats to breakdown a track recorded with a forerunner into downhill/uphill laps, but the native ability of the fenix 3 works much better.

There were a few issues though. Mainly that when uploaded to garmin connect (and therefore connecstats) the downhill ski activities showed up as uncategorised for activity type. The ski de randonnée was uploaded as cross country ski, while I had so far recorded all my previous tours as backcountry skiing. It would be great if the fenix had ability to select what activity type to report when uploading to garmin connect but I didn’t find such ability. So I had to edit the activity type manually on the web each time. It’s unfortunate because it’s quite important to have the activity type correct so connectstats can then break down your stats over time properly. 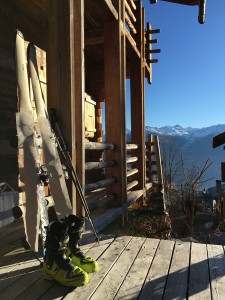 Ski de randonnée uses much lighter boots and skis to which you clip skins on to let you go uphill. Typically you would go in the backcountry off the typical trails, but it’s also quite common to go up in the side of a regular piste. Going uphill is definitely a good workout and leads to the similar type of analysis, comparison over time and statistics you’d want on a run in connecstats.

The default information you get from the activity recorded by the fenix 3 will be very similar to those of a run. The one difference I found was that even though the cadence is reported as an overall value, the details values reported are somehow only 0 or 0.5 instead of the value you expect. It’s a shame because I would really like to be able to see at what cadence I was climbing at different point of the course. I will try to mess about the fit file to see if I can find that information somewhere at some point. 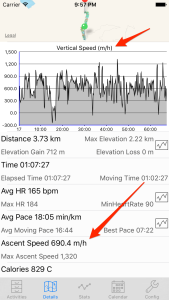 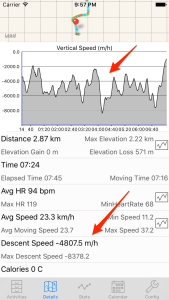 Here again the data is very similar to a run activity, but the fenix smartly breakdown the activity into laps for each run. One change to ConnectStats is that now the laps are labelled run for ski activities and it shows the elevation loss for each run instead of the heart rate in the summary. Of course the heart rate is still available in the detailed view. And in addition to the vertical speed, starting with version 3.0 ConnectStats will show the descent speed.

Ski without the Fenix

If you don’t have a fenix, and recorded your downhill skiing with a garmin, you will end up with an activity including the downhill and the lift time. ConnectStats will let you break down the activity into lift time and downhill time. Tap on the lap and select Ski Laps to get the activity broken down in runs properly. But definitely using a fenix is much nicer for ski activities. 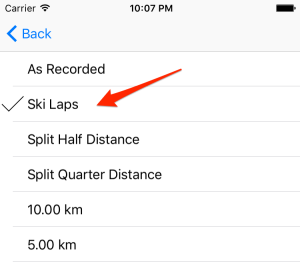 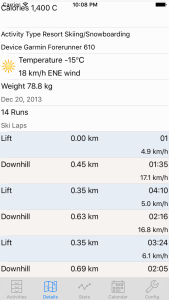 If people have other suggestions of information to display for ski activities, let me know in the comments below.