You can create new rules in two ways. The first and easiest is to edit and use the learning feature.

The auto learn is the easiest way to build a new rules. It can be disabled from the settings if you just want to edit the numbers often. 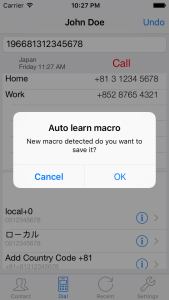 To create a rule using the auto learn feature, simply start by editing the number selected by tapping on the phone number field. The above screen then appear. You can for example remove digits, plus or add a prefix. In this example, you can remove the plus and add the prefix 1966 if you want to dial the number using IDD1966. Once the number is edited you can either call it using the Call button or press the Done button to learn the rules.

The screen on the left then appear

On the screen above, pressing OK will result on a new macro to be created that will let you reapply the same modification to other numbers.

Simply name that new macro in the following screen. 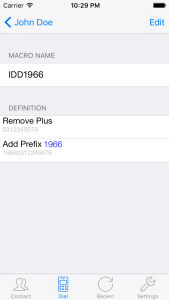 This is the view showing the definition of a rule. Elements are applied from top to bottom. A gray number appears below to show you what the element does to the current number after application of the current element. 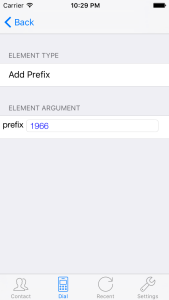 If you press on the element you will see the screen on the right that lets you edit the element.

If you press the element type you can change it, and choose in the list of available elements.

The arguments associated with the element you chose will be available to be changed.

Here is the list of basic element you can use to construct a rule. The example will be given on the sample number +852 1234 5678