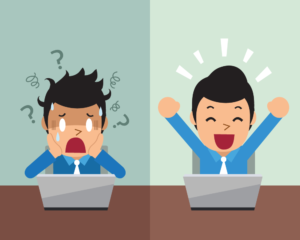 A new version 4.4 is now available.

This fixes the issue around missing data on import, as well as incorrect units for some fields like min or max elevation.

As a bonus, I added support for Garmin Device Power while running, as least for the devices for which users sent me sample fit files.

Because of my own silly bug, ConnectStats was not trying hard enough to look for all activities on the initial download, and was stopping too early, resulting in missing older activities. This is now fixed in 4.4. But it’s hard for the app to know if it missed old activities or not. So if you think you are in that situation, the best is to force the app to reload all activities, by going to “settings”, selecting “profile” and “Force Reload Old Activities” as below. This will start a download that will try to reload everything, it will also help fix data previously imported with incorrect units. 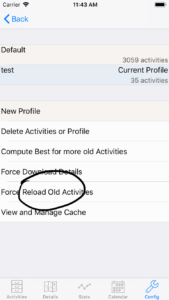 Even though I have build a lot of tests over time, it is always difficult to make sure when a new API changes that the app is behaving properly. This is due to the fact that the API is undocumented and that I have limited scope for testing of new features, given that I do it on my own. I basically only test on my activities and the activities people have sent me over time in the past. Though we should not complain about the lack of documentation given as mentioned in the past, this API is not intended for external use, but just for garmin own website… So I am just grateful Garmin lets ConnectStats continue to use it, even if we just have to reverse engineer everything.

To illustrate the issue and give people a feel for the reason behind some of the bugs, the bad units were due to inconsistencies in the scale of the number depending on which data you were receiving: summary or detail for an activity.

In the summary the elapsed duration data comes as milliseconds:

While in the detail file it comes as seconds…

Beside the elapsedDuration, maxElevation and minElevation everything else is consistent… Go figure… These are hard to anticipate and catch when you test on your own, so I want to thank all the users who have the patience to report details about such bugs and also the patience to wait for me to push fixes.